In his seminal work “Motivation and Personality, Abraham Maslow wrote: “The scientist who is also something of a poet, philosopher, and even a dreamer, is almost certainly an improvement on his more constricted colleagues.” [6] While he was not talking about himself, it is nonetheless true that Abraham Maslow was not only the scientist known as the Father of Humanistic Psychology, [1] but he was also something of a poet, philosopher, and dreamer. A glance through the life and life’s work of this acclaimed figure reveals a man who spent his days urging his fellow human beings to thrive, and showing others how to do the same. 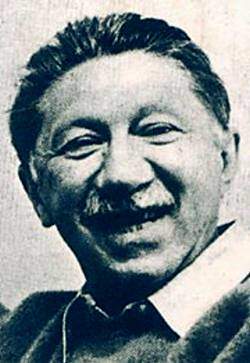 Abraham Maslow was born into a Jewish family who had recently immigrated to the United States from Russia. He was the oldest of seven children. [1] Maslow had a difficult childhood, mostly because of the poisonous influence of his mother, who he would later describe as an “anti-mother” who apparently felt deep hatred towards her son. Her attacks on his physical appearance would later lead to his feelings of being a “marginal man,” or outsider. [2]

In part to escape his mother’s sphere of influence, Maslow went on to spend his entire schooling career at the University of Wisconsin, including a BA, MA, and PhD all in psychology. [1] His time in Wisconsin was tantamount to a spiritual revival, with his study of psychology providing him the answers he was looking for to the questions raised by his traumatic familial and religious history. [2] Upon receiving his PhD, he held various academic appointments, but spent the majority of his career at Brandeis University. He would spend the last 18 years of his life as the chair of the psychology department at Brandeis, writing, researching, and lecturing until his life was ended by an unexpected heart attack while jogging at the age of 62. [1] He was survived by his wife and two children.

One of the ideas that guided Maslow’s entire career was finding the individual amongst its behaviors. In stark contrast to the entrenched Behaviorist orthodoxy of his time, Maslow believed that individuals could not be defined by only their actions. With insight, Maslow even noticed how the very scientists who looked at human behavior so objectively were themselves motivated to fulfill basic human needs. Maslow wrote: “[Science’s] origins are in human motives, its goals are human goals, and it is created, renewed, and maintained by human beings. Its laws, organization, and articulations rest not only on the nature of the reality that it discovers, but also on the nature of the human nature that does the discovering.” [6]

In consistently and resolutely returning the focus back to the individual and his or her human concerns, Maslow pioneered an approach known as humanism, or humanistic psychology. This focus on the individual was also exemplified in his research methods, which involved holistic phenomenological studies of individuals, including case studies and interviews, rather than aggregating clinical data across vast populations.

Described as “one of the most cognitively contagious ideas in the behavioral sciences,” [4] Abraham Maslow’s hierarchy of needs has been used as a motivational technique for innumerable individuals. First proposed in a 1943 paper, Maslow’s original model hypothesized that all human actions, at their root, aim to fulfill five basic categories of needs. [5] Generally represented graphically as a pyramid, the base layer of needs is termed “physiological needs,” including air, food, water, shelter, sleep, and sex. The layers then move up in complexity, to safety needs, love needs, esteem needs, and finally the need for self-actualization.

The basic idea underlying the theory is that humans being are constantly motivated by the fulfillment of some need. However, to say that any action is in pursuit of only a single goal is incomplete: Maslow would go on to note that “in most persons, a single primary all-important motive is less often found than a combination in varying amounts of all motivations working simultaneously.” [6] The reason this theory has retained such power for so many individuals is not that it instructs people on what exact needs they need to fulfill, but rather that it orients them towards fulfilling all of their needs and provides them the motivation to do so.

But to say that Abraham Maslow had an impact on the creation of the field of positive psychology is not to say that his ideas do not retain relevance beyond that field. Contemporary psychology researchers are still actively engaging with his theories, attempting to revise them to incorporate the newest developments in psychological science. [4] This continuing scholarly interest in Maslow’s theory, as well as its massive popular appeal, demonstrates the enduring influence of psychological giant Abraham Maslow.